Used to fund Cops on the Court using basketball to foster trust and reduce gang involvement for youth in the Pleasant Valley and Nicholtown neighborhoods. 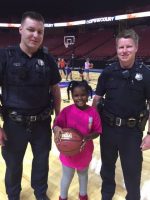 Every Thursday and Friday night off-duty police officers play basketball with kids in the Pleasant Valley and Nicholtown communities of Greenville. In each neighborhood there are usually six officers interacting with up to 50 children of all ages. They serve as mentors and role models as well as teammates.

The Police Department wants to combat crime and gang violence with proactive intervention in the form of programs that reach at-risk youth early and often. A $63,000 GWG grant is funding the weekly Nicholtown “Cops on the Court” outreach held at the Phillis Wheatley Center, paying the officers for their time and providing dinner for all participants.

In February “Cops on the Court Special Edition” was held at the Bon Secours Wellness Arena. Open to all 8 to 17 year-olds in Greenville, this event offered the opportunity for the kids to play basketball with police officers on the same court which will host NCAA Basketball Tournament games. Advertised through press releases, social media, radio and television, the afternoon and evening saw players from all over the county dribbling and shooting hoops with twenty police officers.

The officers played in games with the older kids, gave ball handling and defense tips to the younger ones and were even spotted with little players astride their shoulders for some dunking. One mom said of her smiling 8-year-old daughter, “She just loves the cops.” On another side of the court two women on the force rolled the ball back and forth with a 3-year old who had come to watch her big sister play. Officer Jada Blakely said, “I wish they’d had this program when I was a kid.”She added that playing ball with the youngsters every week “helps them see us as people.” Another officer noted, “They talk to us about stuff going on.”

Sgt. Ed Irick, who spearheads the program, was pleased with the early turnout, noting that holding an open event in downtown offered the opportunity to bring in more kids and draw more attention to the program. He pointed out that the program builds relationships and “that one on one time with an officer out of uniform shows we’re humans.” That afternoon there were lots of athletes all having fun on the big court.